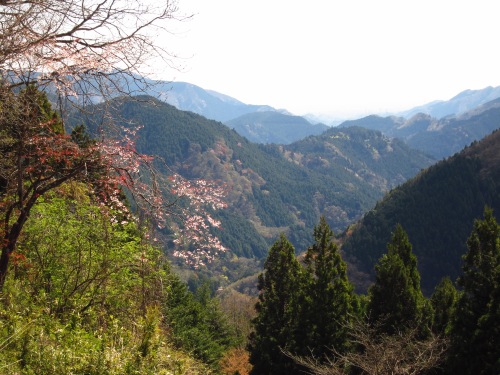 Almost a week had passed before I could once again walk up stairs without a leaden gait, and my neck and shoulders no longer felt in spasm. I had climbed Kazahari Toge for the first time this year. The beautiful quiet tree-lined roads out there, the slowly flowing brooks and Hansel & Gretal cottages made it one of my favourite roads, and in summer the generousity of the shady boroughs made it divine.

But – it was a honeytrap. The road narrowed some more and curved & burrowed deeper into the mountain, and with a frightful and abrupt 180 degree turn looked back with insolence and shot up into the heavens. Kazahari Toge. Say it out loud ! The syllables themselves threaten you, mock you.

It had taken me years to beat this climb, to make it up without walking, then without stopping on the long exposed 20 degree inclines. It was the steepest climb around, a 1150 metre summit with the last 700m elevation covered in less than 5km. It became my favourite training climb, perfect for building up strength and stamina, for teaching the body to handle sustained pain for the occasional hill climb race. And I would be back again and again, fixated on a personal best, a sub something minute time. I beat her, but I never conquered her – the fear remained, and the memory of the agony never faded fast enough. Oh I needed Kazahari, but I certainly didn’t want her.

I wrung out my sleeves, sweat dripped onto the tarmac and at 1150m I started to shiver – this pass punishes you to both extremes, boiling to freezing in minutes. The fast descent into Okutama was colder, and the wind in my ears was deafening but I couldn’t leave with only this; I needed to heal the wounds of Kazahari. So I climbed another pass, a lesser pass, Tsuru Toge, to remind me there was still sanity on some of these slopes, and peeled off into a favourite little-known side valley. The Unabomber route.

The rugged old hunting dog was there, as with every other time I took this narrow road. He leapt at me from outside the abandoned forest hide at the side of the road, snarling and slavering, and as always, was yanked back by the chain that secured him to a wooden tree stump. Someday that chain will fail I mused distractedly. There were no animal skins hanging out to dry today, and I guessed he was looking for his first kill of the season. The growling and barking subsided as I put more distance between us and now my full concentration was on dodging rocks and potholes hidden under the deep shade of the trees, and I climbed carefull over a recent rockslide, careful not to slip over the edge of the road.

It was deadly quiet, but for the odd rock that fell to the valley floor below and I smiled for the first time since I turned on to Kazahari that morning. It was nice to be back to some normality at last.

On Any Other Friday

My personal space, the thickness of a cotton shirt and a suit jacket, compressed by a mass of humanity on a commuter rapid; my air recycled from a hundred pairs of lungs in my crammed carriage, not the mile or two of empty roads and wooded slopes surrounding me now.

On any other Friday, early morning mists would not clear to reveal mountain peaks and the green beginnings of Spring in the company lobby, nor the scatter of bluebells by my desk. And the dank indolent city canal threading it’s way through the office district would be no match for the the foaming violent river I rode past now, waters icy cold with the winter melt.

On any other Friday, I might walk a few flights of stairs for a view across the Yamanote line; there would not be two prodigious mountain passes to climb, and no reward of the expansive Kofu basin laid out before me, almost a mile below. I would not be stopped dead in my tracks by a deer searching for berries in the corridor, and the rustle of papers in my drawer would hardly likely throw up a snake, slithering quickly out the way. And no “Beware of the Bears” signs to alert me to aggressive animals… but make no mistake, these you must watch out for every single day of the week.

Things would be comfortable on any other Friday; controlled interior temperature, clean bathrooms free of flying spiders, and a chair that doesn’t corner at 50kph and hit 70kph on downhills. No remnants of snow in the shade, no single digit temperatures while Tokyo reached T-shirt & shorts conditions. And my arms wouldn’t ache and my legs wouldn’t scream and my heart wouldn’t thump a hole through my chest.

Any other Friday. You can keep it.